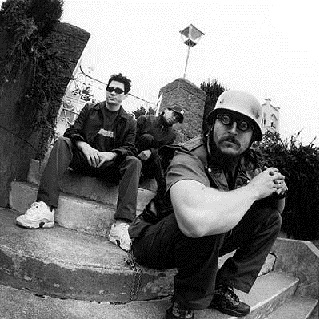 Primus were formed in 1984 by bassist and vocalist Les Claypool, who has always remained the driving force behind the band. The first incarnation of the band included Todd Huth on guitar and Jay Lane (the most notable of a large number in the chair) on drums, and recorded absolutely bugger all. note  this line-up would eventually record one album, billed as the band Sausage, in 1994. The second incarnation was more successful, containing guitarist Larry "Ler" LaLonde and drummer Tim "Herb" Alexander. Alexander left in 1996, dissatisfied with the direction the band was taking, and was replaced with Bryan "Brain" Mantia, who played on The Brown Album and Antipop.

The band went on hiatus in 2000, but then reunited in 2003 with the classic Claypool/LaLonde/Alexander lineup, recording a few new songs for the EP Animals Should Not Try to Act Like People. However, in 2010, Alexander left the band once again and was replaced by Jay Lane, his return to the fold seeing the release of 2011's Green Naugahyde. note  They did also release a digital EP the year before called June 2010 Rehearsal which as the name suggests was just them rehearsing existing songs with Lane. Alexander came back in 2013 though for an all new album, Primus & the Chocolate Factory with the Fungi Ensemble a re-imaging of the soundtrack of the film Willy Wonka & the Chocolate Factory. This line-up continues with 2017's album The Desaturating Seven, inspired by the children's book The Rainbow Goblins, written by Italian author Ul de Rico.

Primus' music is incredibly hard to describe, to the point that it is the only band to have its own ID3 tag in Winampnote Not that this is saying much, given Winamp's notorious inaccuracy with genre tags. The closest general description would be "alternative rock/funk metal" or the band's own suggestion of "psychedelic polka", with main influences including Parliament-Funkadelic, The Residents, Frank Zappa, Metallica and Rush. Additionally, their initial fans came from the Bay Area thrash scene due to opening gigs for Testament and Exodus, among others, and Larry LaLonde was previously in seminal thrash metal bands Possessed and Blind Illusion, the latter of which also included Claypool.

The dominant songwriter and Most Valuable Player is Les Claypool, he of the incredible bass talent and silly voice. For this reason, Primus subvert the general alignment of heavy metal and rock bands, having the bass as the lead instrument and the guitar on the backseat. Larry himself generally complements Les' riffs with distorted noise and going on atonal tangents, but can bash out a heavy metal riff in lockstep if it's required. Alexander and Mantia generally both play incredibly complicated drum patterns that anchor the songs, acting as the Mitch Mitchell or Keith Moon of the band.

The result is a weird, compelling fusion of Heavy Metal, Funk Rock, Progressive Rock and Rule of Funny.

You probably know them as the band who made the South Park Theme Song, while lead singer Les Claypool is known for doing the theme (And the "IT'S ALIIIIVE" scream) from Robot Chicken.

Les Claypool holds the distinction of being the only bassist to ever audition for Metallica and be turned down because he was too good, according to James Hetfield. note For the record, Claypool himself thinks

the "too good" explanation is BS and the real reason was that Hetfield thought Claypool was too weird and said he was "too good" just to be nice. His Funk Metal style also didn't match the band, as he jokingly asked the others after his audition to "jam on some Isley Brothers tunes".

Primus landed in a bizarre, one-sided feud with Dave Pirner of Soul Asylum in 1995, due to their absurdist country-funk-metal single "Wynona's Big Brown Beaver". Les went to great lengths to point out that the song is not, emphasis not, about Winona Ryder - the spelling and pronunciation are different, not to mention the fact that the lyrics make no sense. Ryder didn't mind, but her boyfriend Pirner did, and even renamed one of his songs "Les Claypool's a Big Fucking Asshole" in concert. The correct title should have been "Dave Pirner Doesn't Know What the Hell He's Talking About".

Not to be confused with the God/Ancestor/Homeworld of the Transformers, who has the same name.

The Devil Went Down To Georgia

Example of:
Rock Me, Asmodeus!

The Devil Went Down To Georgia