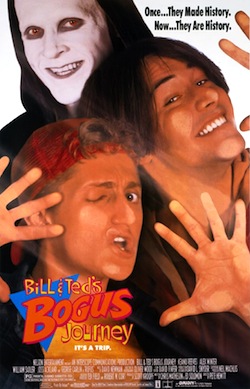 The popularity of the first Bill & Ted film prompted Nelson and Orion to release a sequel two years later. Chuck De Nomolos (Joss Ackland), a rebel from Rufus's utopian future, wants to replace it with a militaristic Crapsack World. He plans to accomplish this by sending Evil Robot duplicates into the past, where they will kill the boys, then deliver a disparaging speech worldwide at a "Battle of the Bands" concert contest and destroy Wyld Stallyns' reputation forever.

With a minimum amount of effort, the robots succeed in killing off the two title characters. However, their spirits refuse to go quietly into the good night and face off against the Grim Reaper (William Sadler). While the evil robots make time with the guys' princess babes, the ghosts of Bill and Ted need to find a way to resurrect themselves, defeat the evil robot "usses" and stop Chuck De Nomolos. To do so, they must go through Heaven and Hell (literally, plus Kirk's Rock) to face their personal demons and gather allies to their cause.