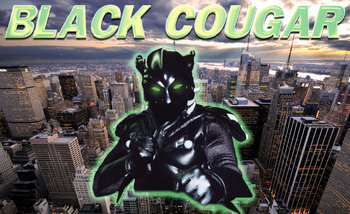 Finally, all children will be safe.
Advertisement:

Black Cougar is a Superhero film by Silvio DiSalvitore.

Silvio (Lenny DiSalvatore) is a teenager who likes hanging around with the neighbourhood kids. They all like him, and he likes them. So, when they start getting kidnapped, he immediately wants to help them. From the toymaker that he lives with, Silvio discovers that the reason he likes kids so much is because he was quite literally made for them.

From there, he lets his creator give him a new superhero persona, Black Cougar, with which he can save the children from whatever danger is targeting them.