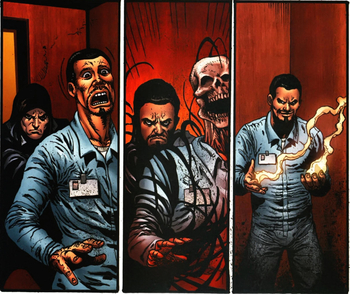 Search, destroy... and mimic.
"I have copied all that is you. You are no longer necessary."
— Dark Bowser, Mario & Luigi: Bowser's Inside Story
Advertisement:

A Doppelgänger, shapeshifting (in a speculative fiction setting) or an identical twin for more mundane stories seeks to kill the original and take their place. If they're quick and quiet, nobody will suspect a thing until it's too late.

If the murderer has full-on Shapeshifting, this technique may well be employed iteratively to pierce increasing layers of security. Just kill and replace the hapless guard, then the sergeant, then his lieutenant superior...

Tends to be caused by the Cloning Blues. Fantasy cousin of Twinmaker.note Although either can appear in either genre, and in practice the two tend to be used for wildly different tones. This is generally a horror trope, while Twinmaker, if played for horror at all, is usually of a more philosophical bent, trying to determine how the seemingly identical victim and copy are related, and by extension what it means to exist as an individual.

Compare Dead Person Impersonation, Mugged for Disguise and Dressing as the Enemy, where the victim at least gets to live, albeit knocked out and half-naked. Replicant Snatching involves a cyborg inhabiting a living host. If the victim is kept alive but restrained, see Capture and Replicate. Contrast Klingon Promotion, where one kills to assume the victim's job. Extreme versions of the Fake King plot tend toward this route as well. One of many reasons you might consider Killing Your Alternate Self. If it's revealed to have already happened, the victim may be an Impersonation-Exclusive Character.

Don't confuse with Replaced with Replica, which involves inanimate objects. Contrast Copied the Morals, Too, where the replacement has at least some of the same personality or moral code that the original did. Clone by Conversion is an inversion, where the killer turns the victim into a copy of themself.

Hal Monitor is guarding the golf course, but he's not the greatest.

Hal Monitor is guarding the golf course, but he's not the greatest.