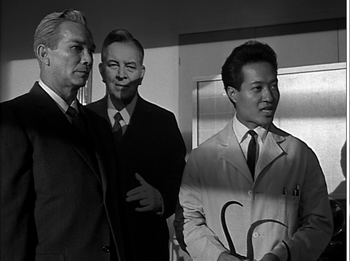 As a pre-transformation Wong and a life-size standup of Selby watch, Dr. Su Lin explains "the most unique achievement that has come from years of research and experimentation in molecular plasticity." 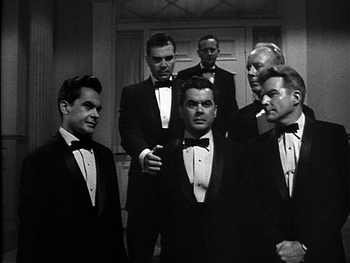 The real Pearson (left) shows off his captured imposter.
The Control Voice: Somewhere south of the Mongolian border and north of the Tropic of Cancer, in that part of the world we call the Orient, a slumbering giant has shaken itself to wakefulness. Passed over in most histories as a nation forgotten by time, its close-packed millions in the short span of 20 years have been stirred to a fury by one man: Li-Chin Sung. A benevolent despot in his homeland, Sung stands as an irresponsible threat to peace in the eyes of the rest of the world. William Lyons Selby, candidate for the presidency of the United States, predicted by every poll, survey, and primary to be a certain winner in the forthcoming election...

With Selby (Sidney Blackmer) a shoo-in for the White House, Asian dictator Sung (Richard Loo) initiates a bizarre conspiracy to infiltrate the American government. He hires a scientist, Dr. Su-Lin (Aki Aleong), to develop a serum that can change the molecular structure of any living creature; the serum makes human flesh pliable, allowing a person to alter their appearance. Ho-Chi Wong (Clarence Lung), a secret agent who has been carefully trained to impersonate Selby, is injected with the drug; then, using a template of Selby's face, Wong molds his features into the uncanny likeness of the candidate.

One night on the campaign trail, as Selby is lying in bed in his Chicago hotel room, Wong (disguised as Selby) breaks in, knocks out the real Selby, molds Selby's face to look like his, then kills Selby in an act of "self-defense" which is soon swept under the rug. On the day of the election, "Selby" and his vice-presidential candidate, Theodore Pearson (Phillip Pine), find time for a hunting trip, during which the imposter blasts an attacking rattlesnake. Since Selby was never a good shooter before, his previously unseen skill with a gun surprises an astonished Pearson; "That's the second time in 20 years you hit what you aimed at", he marvels. A few hours later, "Selby" wins by a landslide — and an enemy agent is sworn in as President of the United States.

While Sung's conspiracy is seemingly going according to plan, the people closest to "Selby" are beginning to notice small changes in his personality and actions. Pearson, still mystified by the hunting trip incident, is also disturbed by Selby's seemingly inexplicable reversals of his anti-Sung policies. Selby's daughter Carol (Nancy Rennick) and son-in-law Bob Conner (Mark Roberts) also notice that several things are off about him, from his suddenly distant demeanor to his taste in food, and confess their suspicions to Pearson. During their visit, Pearson disrupts an attempt on his life by a doppelganger impersonating him, causing him to realize that the real Selby was assassinated and an imposter is sitting in the Oval Office.

Pearson devises a plan to expose the false Selby by getting forensic evidence of the real Selby, only to learn that Selby's body was cremated. Fortunately, Conner, who happens to be a scientist, knows about the serum based on written reports of experiments tested on monkeys by the Russians, and they're able to get a sample of the serum. During a diplomatic reception, Pearson, with the help of Secret Service head Frank Summers (Bert Remsen), arrests his doppelganger (who was once again attempting to assassinate Pearson), displays him to the assembled dignitaries while explaining Sung's plot, and applies the serum on the phony President, revealing his true facade. With the conspiracy exposed to the world, Pearson, who is now Commander in Chief, must decide whether to declare war on Li-Chin Sung. An adviser tells him all he has to do is give the order, but Pearson, realizing that such a decision would result in World War III, replies that "There will be no order."

The Control Voice: To Theodore Pearson, not even so monstrous a crime as the assassination of William Lyons Selby justifies an act of war, because there is no war as we know it, only annihilation. A great American has been killed in the service of his country. Now it is the job of those who continue to serve to carry on guarding our freedom with dignity and unrelenting vigilance.

The Hundred Tropes of the Dragon: