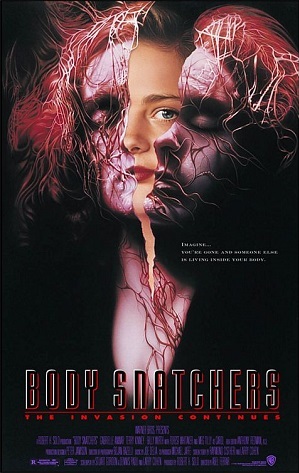 The second remake of the sci-fi classic Invasion of the Body Snatchers (1956). For the other remakes, go here.

Directed by Abel Ferrara and starring a young Gabrielle Anwar, Terry Kinney, Forest Whitaker, Meg Tilly, and R. Lee Ermey, Body Snatchers (1993) is a gender flipped (and teenage) version set on a U.S. Army base in Alabama. More character-focused than the earlier versions — significantly, the heroine's stepmother is one of the first to be duplicated, and the family dynamic plays a big part in the movie. The film also got some mileage from its military setting and the fact that the protagonist herself was already somewhat detached from the community.

The 1993 film provides examples of: