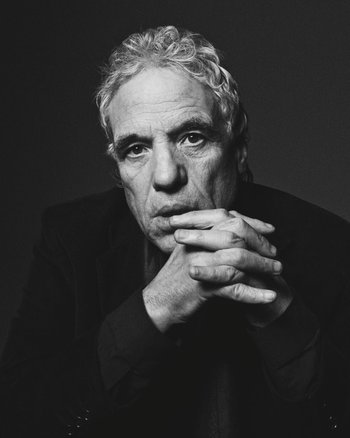 Abel Ferrara (born July 19, 1951) is an American filmmaker from The Bronx, known for making films in a variety of genres and styles, combining both low-brow and high-brow culture, and directing works with intense visceral performances and extreme situations, burdened with strong moral and intellectual concerns.

His career has been quite erratic. Ferrara started out working in American exploitation cinema; his earliest films were either porn or borderline porn. His breakthrough film The Driller Killer saw Ferrara entering the post-Taxi Driver world of vigilantism. His early Breakthrough Hit was Ms. 45, an action thriller exploitation film that marked his first collaboration with Zoë Lund. For most of The '80s, Ferrara worked on a variety of projects, never quite making it into the mainstream. The '90s, however, would prove to be his decade: he made nine films in ten years alongside shorts and music videos, which is remarkably productive for an independent film-maker who has never had a bona fide box-office breakout hit, and in this decade Ferrara made crime dramas, science fiction (his remake of Body Snatchers and New Rose Hotel, an adaptation of a William Gibson story), horror (The Addiction which is shot in black-and-white) and also a film-about-filmmaking like Snake Eyes (also known as Dangerous Game and stars Madonna in a dramatic role). The 21st Century had him becoming quasi-arthouse, with his films Welcome to New York and Pasolini having him taking on real-figures — Dominique Strauss-Kahn (renamed as Monsieur Devereux) and Pier Paolo Pasolini (one of Ferrara's biggest influences).

His most famous films are King of New York (with Christopher Walken) and Bad Lieutenant (with Harvey Keitel). These films are shocking for their transgressive mix of violence, sexuality, and Catholic values with an outlaw empathy for crooked criminals as well as the downtrodden and rejected. Ferrara's films glorified The Big Rotten Apple era, unsparing about the violence and brutality of the city streets at night in its worst areas but also celebrating the tough, breezy melting pot that brought immigrants together and made the city and themselves great. Many of his films are almost ethnographic, such as China Girl (a B-Movie-style take on West Side Story featuring an Italian-American boy and a Chinese-American girl as Star-Crossed Lovers), as well as a focus on ethnic succession, such as Little Italy, becoming an adjunct to New York's Chinatown, while his later films like 'R Xmas and Go Go Tales focus on gentrification and how the Giuliani era has muscled out the poor and struggling out of the city (in the case of Go Go Tales, this is given additional heft by the fact that the film was in fact made in Italy with New York made on sets).

Ferrara is one of the key figures of the American independent film industry who has remained esoteric, obscure and marginal. His most recent films haven't even found distributors for a US release, and most of his films are nowadays funded in Europe where he is considered one of America's greats. Within America, Ferrara used to be called "the poor man's Martin Scorsese" which Ferrara even embraced a few times. Scorsese is one of Ferrara's influences, and Scorsese has also praised him as one of America's great talents.

He made four films with Christopher Walken, four with Willem Dafoe. Both Walken and Dafoe starred in New Rose Hotel (a William Gibson adaptation) alongside another Ferrara regular, Asia Argento.

He also made a video for Mylene Farmer's song "California". It is as sleazy as one would predict.

Ferrara films with their own TV Tropes pages