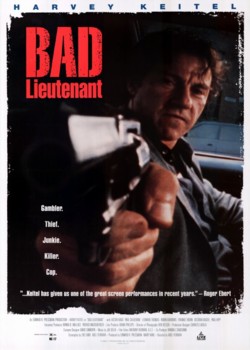 Bad Lieutenant is a neo-noir film made in 1992 by Abel Ferrara, concerning a nameless New York police lieutenant (played by Harvey Keitel) as he goes about his daily business of solving homicides while simultaneously indulging in his drug habits and prostitution and worrying about how to pay off his baseball gambling debts, all the while using his position as a weapon to get away with everything. During the investigation of a nun's rape, the Lieutenant begins to reflect on his lifestyle, wondering if he can change it.

The film inspired The Bad Lieutenant: Port of Call New Orleans, a movie that features a similar main character, yet is still quite different.