Better to Die than Be Killed 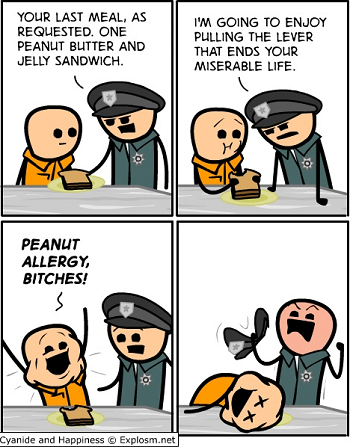 "Well, up jumped the swagman and sprang into the billabong;
'You'll never take me alive,' said he."
— Andrew Barton "Banjo" Paterson, "Waltzing Matilda"

A situation where a character commits suicide rather than face capture, imminent death, enslavement, public humiliation followed by (possibly grisly) execution, or something even worse. If there is no way to avoid death, characters will often prefer to go on their own terms rather than let their enemy decide their fate. Sometimes it's just to deny the enemy the satisfaction of killing them.

The most common places that Better To Die Than Be Killed shows up are stories where people face a Fate Worse than Death in either the classical sense or in a Body Horror / The Virus sense, such as in a zombie movie where being taken by the zombies means being eaten alive or joining their number. In the older stories, such as westerns, samurai, and kung fu stories, a woman faced with rape and death at the hands of her enemies would often choose to die by her own hand rather than suffer this fate.

A variation of this also appears in the classic scene where a disgraced army officer finds a loaded gun on his bed as the obvious hint to kill themselves in order to spare the regiment the embarrassment.

Another variation happens quite a lot, where a mook kills themself rather than let the heroes find out any information. This also shows up in espionage where a captured spy takes a Cyanide Pill, or in Military Fiction where a ship or base engages its Self-Destruct Mechanism, to deny captors any information they might gain from them under torture.

This trope may derive from Real Life. Many cultures that are primarily based around personal glory and honour, including that of Ancient Rome, held that suicide was an acceptable form of death: to a Roman, suicide was not just a way to avoid experiencing perpetual dishonour or humiliating punishments such as Crucifixion, but a noble deed meant to demonstrate one's own stoicism and honour in the face of adversity. Emperor Otho was considered a weak, luxury-loving sybarite until he committed suicide shortly before a plot to assassinate him could be put into effect; his self-inflicted death changed Romans' minds, leading them to see Otho as a greater man than he perhaps really was. Feudal Japan had many similarities with the Romans in their opinion about "honourable suicides": see also Seppuku and Kamikaze. For other comparable examples, see Martyrdom Culture. The Christians were seen as depraved and disgusting by Romans such as Tacitus in part because they would rather accept fates worse than death instead of committing suicide, which the Romans interpreted as almost obscene (as was the Christian willingness to be crucified or dismembered by wild animals, literally the two most dishonourable methods of death a Roman could conceive of).

A small number of actual criminals would rather die than be taken to prison ("You'll never take me alive, copper!") — for the most part, people tend to treat these cases a lot less sympathetically than other examples of this trope, as it's seen as a cowardly way to escape justice. The criminal may even make one last shot at a Blast Out, meaning either a bloody escape, or more likely, Suicide by Cop. If there's a ledge nearby, you can bank on a High-Dive Escape.

Compare I Die Free and Spiteful Suicide. Contrast Face Death with Dignity, Mercy Kill, I Cannot Self-Terminate. In video games and some other media, this could be considered a case of self-kill-stealing, especially to stop experience or a reward being gained by the kill. Has nothing to do with the fact that "People die if they are killed".

As a Death Trope, expect unmarked Spoilers ahead. Beware.