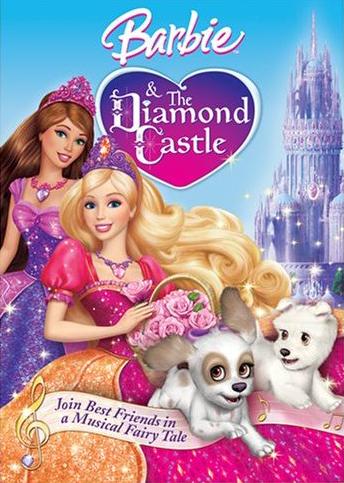 Barbie & The Diamond Castle is the thirteenth installment of the direct-to-DVD Barbie film series, releasing in 2008 between Barbie: Mariposa and Barbie in a Christmas Carol.

In this movie, Barbie and Teresa tell Stacie the story of two best friends, Liana and Alexa. Although the two girls do not have much, they have each other and a love of music. It gets worse when a nasty storm destroys all the flowers they would usually sell, but an act of kindness grants them a magic mirror.

Inside the mirror dwells apprentice muse Melody, who used the mirror as a means of escaping evil muse Lydia, who intends to grab the key to the muses' Diamond Castle and plunge the world into a state of grim darkness.

Now, Liana and Alexa must journey to the Diamond Castle themselves and stop Lydia from controlling all the world's music and dooming it to darkness forever.

When Liana, Alexa and their party cross the Diamond Castle bridge, they undergo a sparkly transformation.

When Liana, Alexa and their party cross the Diamond Castle bridge, they undergo a sparkly transformation.