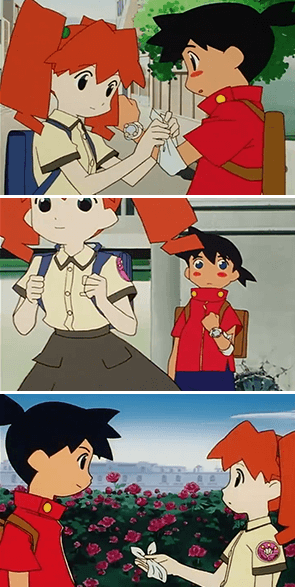 A common Ship Tease device and an occasional form of Meet Cute and/or Samaritan Relationship Starter, a Returning the Handkerchief scenario usually plays out according to the following script:
Advertisement:

1. Bob has somehow dirtied/bloodied/soaked himself.

2. Alice walks by and, seeing Bob's plight, lends him a handkerchief.

3. The two might talk for a while, but Alice usually leaves before Bob has managed to clean himself up.

4. Left with just a dirty/bloody/soaked and borrowed handkerchief, Bob sets off to clean it and return it to Alice. Coincidence usually contrives to make this as awkward as possible, or Bob is already incredibly self-conscious about the whole affair, either because a. Alice is his crush, or b. he's aware of the trope's romantic implications.

Note that the scenario need not be Strictly Formula to count as a Returning the Handkerchief plot: the core of the trope is that Alice has lost something, and Bob has it. The lost item serves to remind Bob of Alice and/or encourage him to seek another encounter with her. It is not altogether uncommon for the handkerchief to go entirely unmentioned upon their second meeting; in which case, the handkerchief is a MacGuffin that disappears from the story once it is no longer needed.

For returning the handkerchief to make any sense, it has to be a washable cloth one (and it usually tends to be a fancy, decorated one at that), which is slightly peculiar considering the prevalence of simple paper tissues in modern society — especially Japan. This might contribute to the fact that the trope is largely discredited these days; if a literal handkerchief does appear in the story, the setup is likely to be parodied or not played entirely straight.

Western audiences might be more familiar with a similar comedy trope, in which Bob immediately offers the handkerchief back after being done with his business, and Alice politely rejects the sopping mess with a "keep it". The two forms likely evolved independently, however, and the classic gag is not this trope. Neither is a gentleman stooping to give back a hankie "accidentally" dropped by a Victorian lady, or a medieval knight being given one as a symbol of The Lady's Favour.

Compare Glass Slipper. Not related to Biting the Handkerchief.