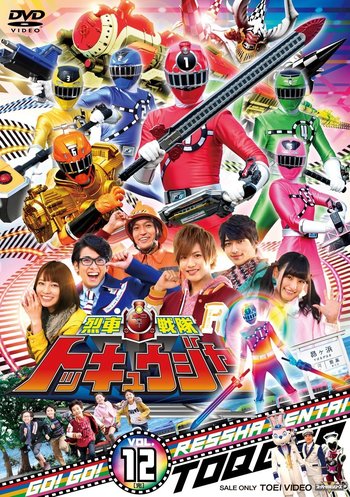 Ressha Sentai ToQger (pronounced "Tokkyuuger" and roughly meaning "Violent-Train Squadron Express-ger") is the 38th program in the Super Sentai franchise, airing from 2014 to 2015. It's notably the first Super Sentai series to be outright train-themed, and is the main reason it lacks a Power Rangers adaptation.

The Rainbow Line is a magical railway network powered by the boundless imagination that exists in our world. However, it is under threat by the evil forces of Shadow Line, who harvest darkness from the human heart to expand their own railway lines and aim to Take Over the World.

Standing against Shadow Line are the heroes of Rainbow Line: five childhood friends who are reunited after many years apart, but realise that they have no memories other than the time they spent together. Drawing on their imaginations to picture themselves as amazing superheroes, they transform into the ToQgers and defend the world from evil.

Aired alongside the Kamen Rider series Kamen Rider Gaim and then Kamen Rider Drive, the former of which sharing a one hour crossover followed by the team making a cameo in the spring Rider movie, in the Super Hero Time block.

The series was the second one that Power Rangers skipped adapting (the first being Tokumei Sentai Go-Busters), jumping from the adaptation of Zyuden Sentai Kyoryuger (as Power Rangers Dino Charge) to Shuriken Sentai Ninninger (Power Rangers Ninja Steel).

P.S.: It's an action-comedy. (At least, at first anyway.) Compare to Gekisou Sentai Carranger and the later Engine Sentai Go-onger.

If the weapon is something that can attack in whatever way you imagine, and the villain is a child-kidnapping and terrorising scumbag, what better way to finish him than by smushing him under a mountain of crying child statues?

Example of:
Death by Irony

If the weapon is something that can attack in whatever way you imagine, and the villain is a child-kidnapping and terrorising scumbag, what better way to finish him than by smushing him under a mountain of crying child statues?