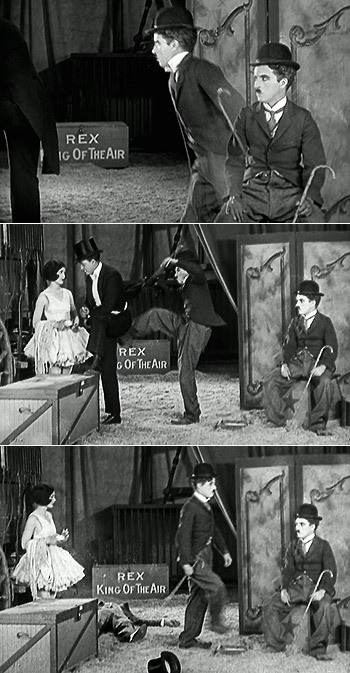 Alice is positively furious with Bob, but she's sitting still and trying her damnedest to keep her rage at a low simmer. Finally, she cannot take anymore; she snaps and breaks a chair over Bob's head, empties an automatic weapon into his body and takes a roaring chainsaw to the remains before cackling like a madwoman over her former friend's corpse.

...Now back to reality: Alice is still sitting there, still giving the evil eye to a very much unharmed Bob. What just happened? We were treated to an Indulgent Fantasy Segue, where the show went straight into Alice's head and showed us what she was thinking without announcing it to the audience first. It's almost exclusively a comedic device, and almost always involves the dreamer inflicting sudden, shocking violence on someone else.

Sub-Trope of Daydream Surprise, which need not be violent. Contrast Imagine Spot, where it's clear from the start that this is all in Alice's head, sometimes through the use of a Fade to White. Compare Enemy Without. It's as good a means as any for enabling Superdickery.

Occasionally the thing the character would like to do is shown to be in complete contrast to what they actually do. A particularly detached individual may even get angry or concerned about events within their fantasy segue, and take these out on whoever they're talking to.

Compare Power Fantasy. Not to be confused with Chaos While They're Not Looking, where the fight between parties actually happens and they pretend it didn't for a third party.