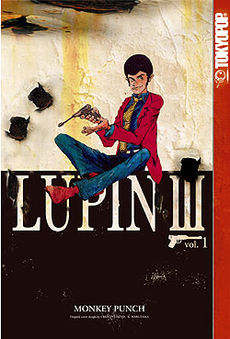 Volume One of the first Manga series
In 1967, Monkey Punch was tasked to create an adult-oriented Manga character. For inspiration, he drew from James Bond, MAD Magazine, and Arsène Lupin. It later became a multimedia franchise.
Advertisement:

Lupin III (Japanese: ルパン三世) was first printed as a serial Manga, published in the magazine "Weekly Manga Action" (which began in July), on August 10, 1967. It lasted for 94 issues, ending in May 22, 1969. Monkey Punch recontinued the story two years later,note for under a year; 1971-1972 with the title of "Lupin III: The New Adventures". Those two sets of stories were later collected together into the first 14 manga volume series. Later stories of Lupin are also released in Weekly Manga Action, until the fifth series, which was printed in the Lupin III Official Magazine. The Lupin III Official Magazine is a quarterly magazine that is published by the same people who make Weekly Manga Action, and it includes information on upcoming and recent Lupin III information and merchandise.

In addition to the above, some of the Lupin anime has been re-adapted back into color Manga.

Tropes of the Lupin the Third Manga: