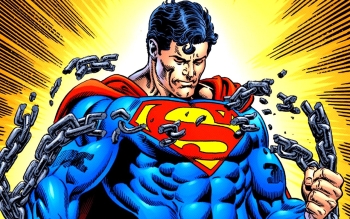 Chains? You're funny.
Q: Did Londo's men weaken the chains after all, or was G'Kar just really determined?
A: That was one determined Narn.
— J. Michael Straczynski talking to fans about Babylon 5.
Advertisement:

Heroes showing off their power — literally or symbolically — by busting out of chains, ropes, or similar restraints. Sometimes it involves the "flex my pecs to bust these bindings" thing, or it can be "I'm so pissed off, it's like my handcuffs are made of lead." Whichever the case, Heroic Resolve or Unstoppable Rage is usually at work.

If it turns out that the prisoner could have busted out any time, he's a Play-Along Prisoner. If he already has, and is only pretending to be still restrained, he's Slipped the Ropes.

See also With My Hands Tied, Chained to a Rock, and Chained by Fashion. If a chair is involved, we might have a Bench Breaker. If the character uses their broken bonds as a weapon, you get Chain Pain.