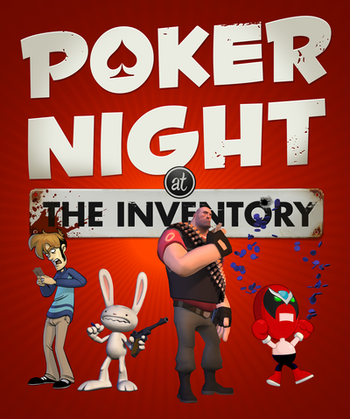 This isn't your ordinary game of Poker.
Advertisement:

So, a Russian mercenary, a loudmouthed luchador, a gaming webcomic writer, and a hyperactive, sociopathic lagomorph walk into a bar hosted by a retired pirate...

The Inventory: a former speakeasy founded against the possibility of an early draft of the 18th Amendment that was even more stringent than the one we know, now re-purposed as a highly exclusive club. Gaming's most iconic characters settle in here during their "downtime," when their games are powered down. It's poker night, and four of gaming's greatest characters walk in to play, about to bet everything they own for the sake of winning. Oh, and you're there, for some reason.

Poker Night at the Inventory is a crossover game from Telltale Games featuring Strong Bad, Max, Tycho and the Heavy engaging the "Player," a mysterious new challenger, in a game of Texas Hold'Em poker.

The trailer can be viewed here.

It was followed by Poker Night 2, released in April 2013.

Whenever Strong Bad gets eliminated from play in Poker Night at the Inventory, he will sometimes scream this.

Whenever Strong Bad gets eliminated from play in Poker Night at the Inventory, he will sometimes scream this.