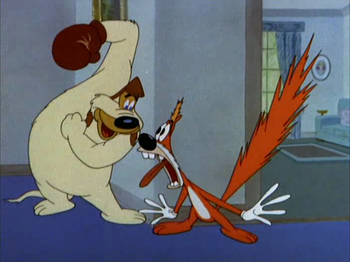 Made for boxing, not for typing.
"You are RED Team. You have Killing Gloves of Boxing. You earn these for being great killer! You should try out for RED Team."
—Heavy Weapons Guy, Poker Night at the Inventory
Advertisement:

Even in the less politically correct era of animation long gone, the pioneers of animation thought that using boxing gloves instead of bare fists lowered the level of violence. They were also much easier to draw, and easier to see. However, it has since been proven that because of the extra weight of boxing gloves and because they allow people to hit harder without hurting themselves, they actually cause more damage than they prevent.

Compare with When All You Have is a Hammer…. If the red boxing gloves are not directly on someone's fists, then this is Extendo Boxing Glove or Improbable Weapon Usage.

Concealed red boxing gloves come under this, with the application of Fridge Logic and Hammerspace to hide something about a foot wide in, say, 5 inches of space. Yes, red boxing gloves in cartoons can get very oversized.