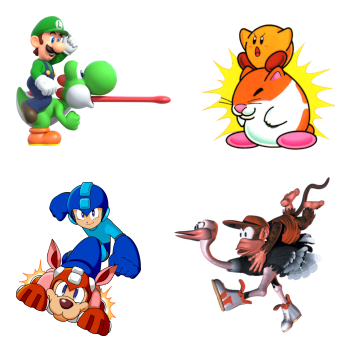 Saddle up, pard'ners!note Clockwise, from top left: Yoshi, Rick, Expresso the Ostrich and Rush.
"I know! We should team up! Come on! Hop on my back!"
— Yoshi, Super Mario Galaxy 2
Advertisement:

A Power-Up Mount is sort of like a power-up item plus Mon. It is an animal (usually adorable) that the main character can ride on. Riding on a power-up mount usually does one or more of the following:

Will overlap with Horse of a Different Color.