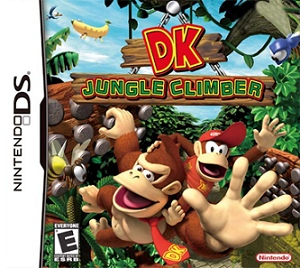 Moving on up, one peg at a time.
Advertisement:

DK: Jungle Climber (also called Donkey Kong: Jungle Climber in Europe and Japan) is a Donkey Kong game developed by Paon for the Nintendo DS, released in 2007. It features the characters and visual style of the Donkey Kong Country series, but its gameplay mixes traditional platforming and a peg-grappling mechanic highly reminiscent of the old NES game Clu Clu Land. The game is a sequel to the Game Boy Advance title DK: King of Swing.

The story, such as it is, concerns Donkey Kong and his friends taking a trip to Sun Sun Island. There, they notice an enormous golden banana floating high above a mountaintop. Donkey and Diddy climb the mountain to investigate, only to realize the banana is actually a spaceship belonging to a banana-shaped alien named Xananab, from the planet Plantain. Xananab tells the Kongs that King K. Rool and the Kremlings have stolen the magical crystal bananas from him and are trying to use them to conquer the universe. Moved by his plight, the Kongs agree to explore Sun Sun Island (and a handful of surrounding islands) in search of the artifacts, and defeat their old nemesis once again.