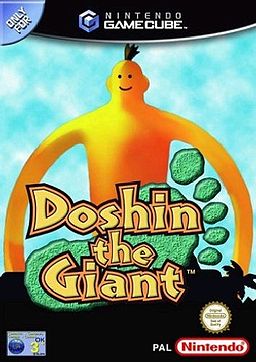 Doshin the Giant is Nintendo's take on the god sim genre. Doshin is an embodiment of the sun, a giant who oversees the inhabitants on Barudo Island, a tropical paradise not found on any maps. The player is given a choice of helping the inhabitants expand their villages and found new ones as Doshin, the love giant; or they can also become the hate giant, Jashin, and rain down death and destruction.

The game take an innovative approach to resource management. Trees supply green energy over a certain readius, which is needed to prevent houses collapsing. Trees only last for a finite time, but if seven are brought together, they will immediately wilt and eight new ones will sprout, as well as a flower.

Doshin absorbs the love and hate of the islanders, and in doing so grows larger. Love is gained by seeing to their needs — planting trees, flattening land or raising land from the sea, removing obstructions, and after a while, picking up a villager and giving them a tour of the island. Hate is absorbed by destroying buildings, killing villagers, and generally making a right nuisance of oneself. Garner enough love or hate from any given village and the inhabitants will start to give it out upon simply seeing the giant. It is worth noting that hate is a stronger emotion than love — a village that loves the giant will give out a modest number of hearts and can be made to hate him easily enough, while a village that hates him will give a lot of skulls. Also, Jashin will always generate hate simply by appearing, but particularly loving villagers will revert to hearts as soon as he transforms. This also affects the style of the buildings, with a loving village producing warm and welcoming structires, while those of a hating village are spiky and threatening.

When a village reaches maturity, its inhabitants build a monument at the centre. The aim of the game is nominally to collect all 16 possible monuments, though players often find it more fun to simply take care of their little people, and/or destroy them. Also, it may not be a good idea to get the final monument.

The game was originally released in Japan for the Nintendo 64 in 1999. A 64DD add-on entitled Doshin the Giant: Tinkling Toddler Liberation Front! Assemble! was released the next year, which saw a little kid helping Doshin in the dream world by urinating on things. We think. The original was also ported to the GameCube, appearing in Japan in March of 2002 and getting a European release in September of the same year, with no US release in sight. The GC version is, thankfully, free of tinkling kids. Western audiences are most likely even somewhat aware of this game thanks to Doshin and Jashin appearing as trophies in Super Smash Bros. Melee.