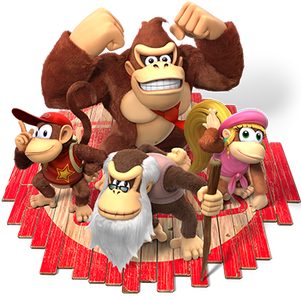 "He's coming out of hibernation. It's the BODACIOUS BEAST, the PRIME PRIMATE, DONKEY KONG. Introducing DONKEY KONG COUNTRY, the first fully rendered video game EVER. Featuring his sidekick DIDDY KONG."
— The original commercial for the game

Introduced in 1994 for the Super Nintendo Entertainment System, Donkey Kong Country introduced the groundbreaking technique of using pre-rendered 3D graphics in a 2D console game and marked the final decisive milestone in the early-to-mid '90s console war between the Sega Genesis and Super Nintendo, with the latter emerging in the lead in the west.

Donkey Kong 64, from 1999, brought the series into the third dimension. In it, King K. Rool returns with a vengeance. Figuring that if he and his people can't have Donkey Kong's island, nobody can, he steers an enormous high-tech warship next to it and plans to blast it right off the face of the Earth with his secret weapon, the Blast-O-Matic. This game unites a team of Kongs (Donkey, Diddy, Dixie's sister Tiny, Kiddy's brother Chunky, and odd-man-out Lanky, while other familiar faces such as Cranky and Funky lend a hand along the way) who set out to find a series of 200 solid-gold giant bananas and the missing blueprints to the Blast-O-Matic in an effort to trounce the Kremlings for the final time.

Supporting NPCs in the series include:

Also of note is that during the first game's heyday, the Blockbuster World Video Game Championships II were given an authorized romhack of the game called Donkey Kong Country Competition Cartridge, which basically turned the game into a competition to grab as many bananas as possible within a time limit of five minutes, with only a few levels available and several tweaks to encourage scoring. After the competition ended, Nintendo took back the carts and sold them to subscribers of Nintendo Power. Only 2,500 copies of the game are known to exist, and it has since become a highly valued collector's item.

The 1998 Game Boy Color port of Donkey Kong Country (not to be confused with Donkey Kong Land, which we'll get to in a minute) has two extra mini-games: Funky Kong's Fishing Mini Game and Candy's Challenge, where you perform in luck-based tasks similar to the various Bonus Stages. Funky's Fishing Game is also seen in the 2003 Game Boy Advance port, though Candy's Challenge is replaced by Candy's Dance Studio. Also in the GBA port, the player can fill the Kongs' scrapbook by finding cameras and performing in-game feats of varying difficulty. The GBA port of Donkey Kong Country 2 contains the mini-games Expresso Racing and Funky's Flight Challenges, in addition to bringing back the scrapbook feature. There is also a new boss, Kerozene, to fight. In both games, all the mini-games must be won each time they're encountered and the scrapbook must be completely filled in order to achieve the highest completion percentage. (In the port of 2, there is an additional mini-game at Klubba's Kiosk called Bag a Bug, but playing it is completely optional.) The GBA port of Donkey Kong Country 3 contains the mini-games Funky's Rentals, Cranky's Dojo, and Swanky's Dash. There is no scrapbook feature this time around. All of Funky's challenges must be completed to achieve the highest percentage, but Cranky and Swanky's games need only to be won once. The game also adds a new boss, Kroctopus, and a new area, Pacifica, containing six additional levels.

Each SNES installment also had a Game Boy counterpart; Donkey Kong Land, Donkey Kong Land 2, and Donkey Kong Land III. The Land games translated the pre-rendered graphics of its sister series as well as it could to the Game Boy's small, monochrome screen and usually featured new levels.

A Racing Game Spin-Off appeared as Diddy Kong Racing. There was to be a sequel to Diddy Kong Racing called Donkey Kong Racing (go figure), but Rare's contract with Nintendo for usage of the Donkey Kong franchise ran out. Then Rare got bought out by Microsoft, demolishing any remaining hope that the contract might be renewed. However, Nintendo did toy with the franchise for a while, producing the Donkey Konga trilogy of rhythm games with Namco as well as Donkey Kong Jungle Beat, an action-platformer that is not set in the DKC continuity, but is nevertheless very reminiscent of its style. Following this, they handed the character over to Paon, a company that produced DK: King Of Swing for the Game Boy Advance, Donkey Kong Barrel Blast for the Wii, and Donkey Kong: Jungle Climber for the DS.

Donkey Kong Country also had a short-lived French CGI-animated series based off it; several elements from this show ended up in Donkey Kong 64. Information on the series can be found here.

The characters in this series can be found here.

Cranky Kong: You kids have it easy with all these wikis and trope catalogs! Back in my day, if you wanted to find out information about your favorite video games, you'd have to wait every month for gaming magazines to come in the mail to read developer interviews and trivia collections. And by golly, we'd never develop any of these silly editing addictions back then!