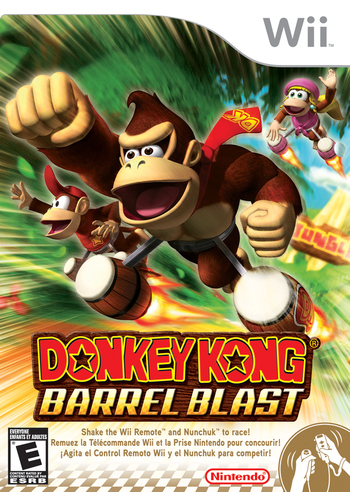 A mascot racer starring Donkey Kong and friends. Originally intended as a GameCube title that made use of the bongo controller (used in other Donkey Kong games, such as Donkey Konga and Donkey Kong Jungle Beat), it made its debut on the Wii instead, utilizing motion controls in lieu of percussive ones.

The game was developed by Paon, who previously made DK: King of Swing and its sequel DK: Jungle Climber. Instead of racing in the three vehicles used in Diddy Kong Racing and its DS remake, the characters ride rocket-powered bongos. While the game borrows many elements from the Mario Kart franchise, it also has its own unique item system featuring elements from the Donkey Kong Country series and Donkey Kong 64. It also features a challenge mode that puts the player in various scenarios to race in.