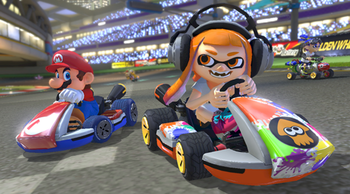 Completely crazy, cute, chaotic, cartoonish car chase comes careening closely.
"Like most silly kart racing games, driving well is only half the battle. Driving like an asshole is the other half."
— Classic Game Room, its review

A type of racing video game where drivers also attack each other with Power-Up weapons they can pick up on the tracks. Often those tracks will be littered with obstacles. The racing roster is typically from established properties, such as a spinoff or a Licensed Game.

As a consequence of these gameplay additions, driving isn't just about making tight turns and flooring it on the straight-ways, but also avoiding obstacles and weapons, while lining up against enemy racers to use one's own weapons. This results often in quite chaotic races. In short, expect Wacky Racing to be the norm.

A common aesthetic is either (for most games) light and cute or (for other games) silly and zany. The former is rarely outright a Sugar Bowl, but regardless this look can make the games look easier than they actually are. Some games break with the trend and go for more realistic styles, or even dark and gritty.

The majority of these games use existing franchises, usually video games that started in other genres. Occasionally one will be made with original properties. For existing properties, most characters can be part of the racing roster (often in a Massive Multiplayer Crossover), whether protagonists or antagonists (this genre is the reason the trope Go-Karting with Bowser is named so). If the source material doesn't have many characters, then Original Generation characters may be included.

Distinctive aspects of these games include:

Sometimes examples try to break the mold, but usually they stick so close to the standard aspects set by Mario Kart that this has yet to go From Clones to Genre.

A Sub-Trope of both Racing Game and Vehicular Combat.

Games in this genre

Works that feature this genre in part