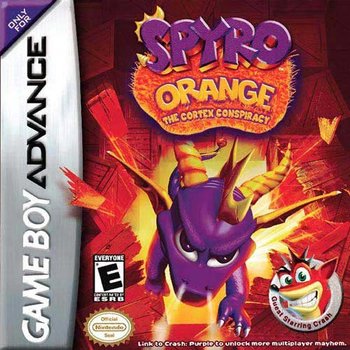 The eighth Spyro the Dragon game, released in 2004 on the Game Boy Advance. This game is a crossover with the Crash Bandicoot franchise, and is the series' first foray into 2D platforming. Also known as Spyro Fusion in Europe.

Compared to its sister game, Crash Bandicoot Purple: Ripto's Rampage, Spyro Orange received a lesser reception, with its lighter difficulty and 2D gameplay often cited as drawbacks compared to prior Spyro titles, not to mention the large amount of mini-games.

Followed on handheld consoles by the Nintendo DS RPG Spyro: Shadow Legacy in 2005, and then by two more GBA games in 2006 and 2007 via the rebooted Legend Of Spyro series.