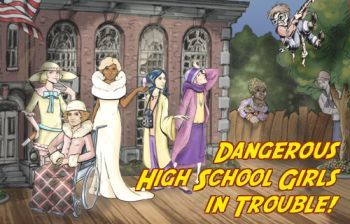 Dangerous High School Girls in Trouble! is, surprisingly, not an NC-17 rated movie (but has a name very close to one of the sketches in The Kentucky Fried Movie), but a casual puzzle game on PC, designed by Keith Nemitz and published by Mousechief in 2008.
Advertisement:

Set in a fictional American community in The Roaring '20s, you select a girl from a dozen different girls to play your leader (or "queen" of your "gang"), and she recruits up to three girls to assist her. Each girl has varied abilities in four different talents (Popularity, Glamour, Rebellion, and Savvy), which determine how successful they will be when playing certain mini-games (Taunt, Expose, Fib, and Gambit). The goal of the game is to use the girls' different skills to gather information and expose the dirty secrets of the community without getting caught up in it themselves. Only the most charming, witty and rebellious are able to survive here.