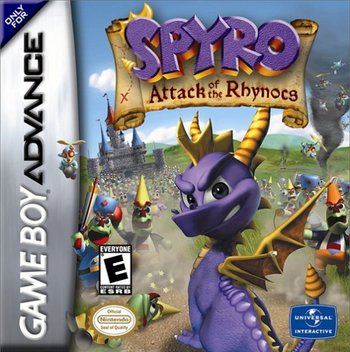 The seventh Spyro the Dragon game and the last one developed by Digital Eclipse, released on the Game Boy Advance in 2003.
Advertisement:

In a terrible mishap, Spyro, Sparx, and the Professor have inadvertently torn a hole in the fabric of space between the Rhynoc and Dragon Realms. Now, at the command of the elusive Ripto, droves of Rhynocs are pouring into the Dragon Realms in yet another attempt to make life miserable. Spyro must help the Professor close the hole quickly before both the gate and Ripto's giant ego get too big and the two realms fuse together permanently!