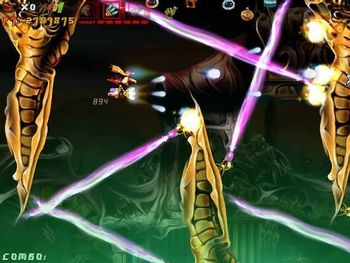 Where does the energy of a planet go, when that planet dies? And why do some planets die in the first place? Nobody knows, but that's not going to stop you: you will find out what's happening to your dying planet, no matter how hard your research will be. And it WILL be harder than you think, that's guaranteed...

is a side-scrolling Shoot 'em Up by Atlanteq released for Windows PCs in 2003. The rather loose plot has your character pilot the titular ship in order to destroy strange, evil creatures threatening an unnamed planet. In this game, you gain power-ups by scoring combos by destroying chains of enemies. Side weapons are available too, such as a machine gun, homing missiles and a Spread Shot. A Smart Bomb is available in the game as well.

The game contains five levels, the first four of which are based off water, fire, lightning and wind. The final level "Void", is a bleak level whose terrain is the final boss itself.

...Or rise, fall and salvation of a planet