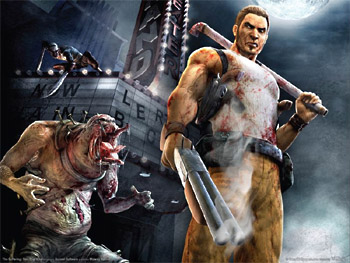 You think you've got it bad...
"Take away a man's light, his clothes, his food, his friends, his air, and you leave him with nothing but himself. And for most, that is not pleasant company."
— Ranse Truman
Advertisement:

The Suffering is a horror series created in 2004 by Surreal Software, also known for the Drakan games, and published by Midway. The player controls a man named Torque who was accused and convicted of murdering his wife and children in cold blood — the case was quick, as Torque's only defense was that he couldn't remember anything. Thus, Torque gets shipped off to Carnate Island. The days go along swimmingly until Torque moves in.

Then it all goes to Hell.

First, it was just an earthquake. Then, slowly, Torque's fellow prisoners are killed one by one in increasingly disgusting-sounding ways. A monster whizzes past Torque's cell, which opens slowly, setting him free. And thus, Torque steps forward into the halls of the Abbott Penitentiary, where prison is, quite literally, hell. Along the way, Torque finds himself in the company of an insane doctor with a more-than-professional interest in his condition, a vicious prisoner who killed his wife on a conjugal visit and took the chair, and an executioner with a particular glee in his work and eager to see Torque's blood shed. All three inflict their own unique tortures on him. It's up to the player to decide how to handle all of this: with compassion or with violence.

That is the internal battle, the fight to define Torque's mind. Of more immediate concern are the "Malefactors," the hideous monsters that spring from Carnate's soil and represent all the horror that has occurred on the island. You see, Carnate has a long and storied history with the worst aspects of the human condition. Over the centuries, period-specific sadism has soaked the island's soil with blood. As many have discovered, Carnate has become a manifestation of evil, drawing out of the violence and hatred from all who step foot on the island. And now, Carnate wants Torque to become its newest spokesman.

One perk of the game is its unique brand of horror, effortlessly mixing Psychological Horror with physical horror while keeping the bona-fide badass Torque gunning and running, and never once feeling dissonant about it.

A sequel, The Suffering: Ties That Bind, was released in '06. It picks up with Torque returning to Baltimore and finding out that Malefactors have somehow gotten there too. He has to fight his way through the situation and get to the bottom of it, while simultaneously dealing with the past (specifically, his family's murder).

After a long time being out of print, both the original game and the sequel were re-released on GOG.com in September 2017.

The Slayers bear strong resemblance to the Cenobites from Hellraiser, and the Mainliners aren't far behind them.

Malcolm: We all float down here.