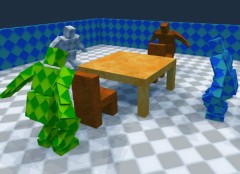 It starts out serious... 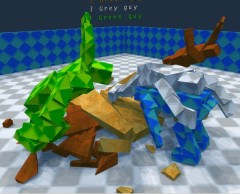 And then it turns out all four of them have had a bit too much to drink.

Sumotori Dreams is basically a miniature sumo wrestling shareware game, except more about shoving your opponent than actually wrestling. Actually, it's more of an interactive physics simulation game, with at least two opponents trying to knock their opponent(s) down first. While the visuals are extremely simple, they demonstrate a surprisingly sophisticated destructable object system, and the "wrestlers" utilise Ragdoll Physics and a procedural animation system not unlike Euphoria, allowing them to balance and get back up on their own.

They also act like they're completely wasted. The results are almost always hilarious.

The official website stopped working sometime in the late 2010s, but it can still be downloaded here