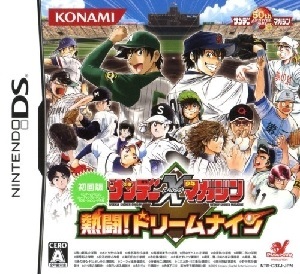 Sunday X Magazine: Nettou! Dream Nine is a Baseball simulator developed by Pawapuro Productions and published in 2009 by Konami for the Nintendo DS. It is a spinoff of the Power Pro-kun Pocket series made to celebrate the 50th anniversary of the Weekly Shōnen Sunday and Weekly Shōnen Magazine manga magazines by publishers Kodansha and Shogakukan.

The game features characters from a good number of series such as Major, Ore wa Captain, Diamond no Ace, Dreams and Kyojin no Hoshi. Even non-Baseball manga series such as Osomatsu-kun, Detective Conan and Hajime no Ippo are included.

The game does not feature any Success Visual Novel scenarios, but you can unlock a Story mode after clearing the Stadium tournament mode for the first time. This mode plays key scenes from each manga and then drops you into an ongoing match to clear certain tasks.

See Sunday VS Magazine: Shuuketsu! Choujou Daikessen for the Fighting Game crossover between action shounen characters from both magazines.