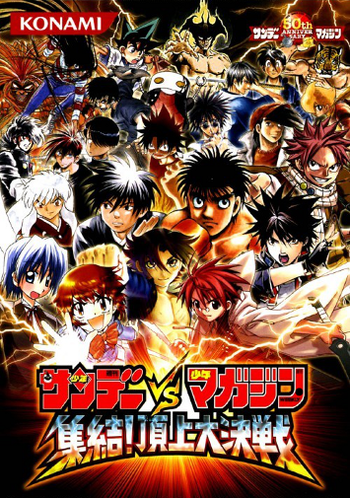 Publishers Kodansha and Shogakukan, in anticipation for the 50th birthday of their top magazines: Weekly Shōnen Sunday and Weekly Shōnen Magazine, initiated a project with Konami for a Crossover game with characters from these two eponymous magazines; a Fighting Game was chosen as the most fitting for characters mostly coming from action Shōnen series.

Sunday VS Magazine: Shuuketsu! Choujou Daikessen is a Crossover Fighting game, developed by Konami Computer Entertainment Aomori and Hudson Soft, and published by Konami for the PSP; released in March 2009 to celebrate 50 years of Weekly Shōnen Sunday and Weekly Shōnen Magazine history, it features 30 playable and more than 100 support characters from the first years to the latest years of a five decades epic.

The gameplay is centered around simple matches one-on-one, each character can equip one support to use in the matches, and they can string simple combos with standard, special and ultra attacks. The game offers a Quest Mode, a single player adventure where the chosen character fights and interacts with the merged universes of Sunday & Magazine, a simplistic Story Mode so to speak; of course it also has the straightfoward Arcade Mode, and the Multiplayer modes.

Series and characters featured in the game:

The chart above lists all series present in the game, but just the 30 playable characters

in each one of them (asterisk {*} indicates a unlockable Secret Character), the other hundread supporters will be listed in the Trivia page, a work in progress.

Sunday VS Magazine provides examples of: