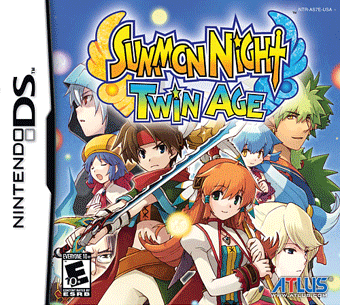 Summon Night: Twin Age (サモンナイト ツインエイジ 精霊たちの共鳴（こえ） Samon Naito Tsuin'eiji Seirei-tachi no Kyōmei (koe)) is an action role-playing game in the Summon Night series for the Nintendo DS. Summon Night uses a party based system of three characters at a time and a fully touch-based control system. The game was developed by Flight-Plan and published by Atlus. It was released in Japan on August 30, 2007 and in North America on June 3, 2008.
Advertisement:

In the land of Clardona, two races are in constant conflict over the land and its spirits, the humans, and the beast-like Kascuza. Though the war has yet to fully cease, an interrim of peace can be found on the tiny island of Jarazi. Here begins the story of the main duo, Reiha, a human girl with spiritual powers, and Aldo, a Summon Beast she summoned seven years prior. They have lived here for as long as they can remember, about to set out and complete their coming of age ceremony.