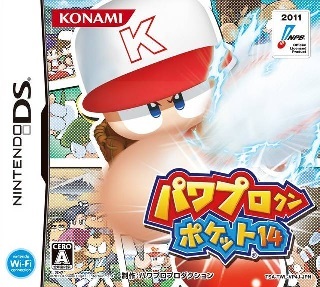 Power Pro-kun Pocket 14 is a 2011 Baseball simulator + visual novel + card game - turn based RPG developed by Pawapuro Production, formerly Diamond Head, and published by Konami for the Nintendo DS. The Baseball simulator has an optional rule that lets players perform super moves and the Mini Success mode formerly called "Guppy" now comes with actual storylines for both of its difficulty modes.

A new Card Baseball system is introduced for the Inner Success mode that replaces the turn based RPGs from previous installments. In it, a Baseball match is played as a board game and players can build decks of cards with various effects.

After 12 years and 15 installments (not counting Pawapoke Koshien), the Pawapoke series is over.

11 years ago, Glasses Clan members Yamada, Oda and Yuda found a dying woman on the streets and promised to raise the child she was holding. They decide to groom the kid into the ultimate Baseball boy. In the present day, their son "Hero 14" is an up-and-coming elementary school ballplayer who gains supernatural powers and must master them on his way to championship.

While trying to pick up a lost ball, a boy falls into a hole and ends up in a world similar to Japan's Edo period. To return home, he must face the rulers of this land in Baseball card game duels.

This scenario follows a ballplayer from team Paraiso. There are two starting difficulty options and an unlockable hard mode. In each mode (Practice, Regionals, Koshien), the team is managed by different people from previous games and there are different events to watch.