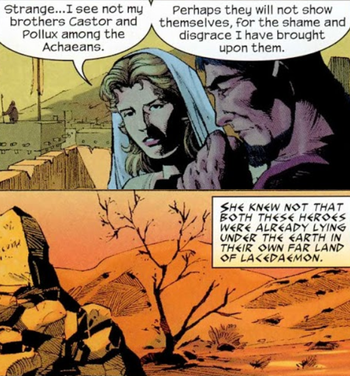 Dr. Chilton: [A patient] tells everyone that you are a monster.
Dr. Lecter: [smiles] Well, in that case, you're dining with a psychopathic murderer, Frederick.
— Hannibal
Advertisement:

Some tropes, such as the Unreliable Narrator, ensure that the audience is never quite as well informed of the truth as the characters are (or, at least, one particular character). Dramatic Irony, or Suspense as it is also known, turns that on its head, letting the audience see the whole picture when The Protagonist, or even the entire cast, is kept largely in the dark. You, the viewer, are actually ahead of the characters.

Fat lot of good it does us though. When dramatic irony crops up, it's usually not to let us feel smugly superior; instead it's to toy with our fragile little emotions. If we're lucky, the emotion being manipulated will be amusement. In serious situations, dramatic irony will be present to make us squirm and bite our fingernails in anxiety, since we can see the danger coming but cannot communicate this knowledge to the characters in order to save them.

To really fit the definition though, one of the characters must make a statement, or perform an action, to fully illustrate that they are unaware of the situation. To the character, what they're saying or doing is perfectly sensible based on the knowledge they have. To the audience though, the statement or action is ludicrous or dangerously uninformed.

There are three main uses of Dramatic Irony (quite apart from the unintentional result of making things more Spoilerproof):

This trope is a staple of theatre, thanks largely in part to the mechanics of that particular medium. Characters move on and off stage, but the audience stays in place. They're the only ones who stick around long enough to hear the "whole story". In the theatre, however, there's usually one other party who knows what's going on, especially if it's a Tragedy — and that is the villain.

Classic theatre usually favours tense or comedic use of dramatic irony. Modern media is more likely to employ the "cringe factor" variation, which walks the line between tragedy and comedy.

A character's Hidden Depths are often a source of Dramatic Irony. Gave Up Too Soon can also often overlap, in cases where the audience knows how close the character is to success before they give up. A favorite trick of time-travel or historical works; see It Will Never Catch On. Foregone Conclusion or Doomed by Canon often result in this. May end with an Internal Reveal. The opposite is Tomato Surprise, when the characters know something that the audience doesn't know. Innocent Inaccurate is a sub-trope.

A type of Irony.

Compare Dramatically Missing the Point. Contrast "Could Have Avoided This!" Plot, where the drama come from them catching on to the Dramatic Irony too late. This trope is not "general irony, Played for Drama".

Music
Podcasts
Religion and Mythology
Roleplay
Tabletop Games
Theatre
Video Games
Visual Novels
Web Animation
Scootaloo: I thought you loved me!
RF Rainbow Dash: I did love you! I tried so hard for you! In hopes you would pass your test! You had it in you, kid. It was up to you to save yourself!
Webcomics
Web Original
Feedback