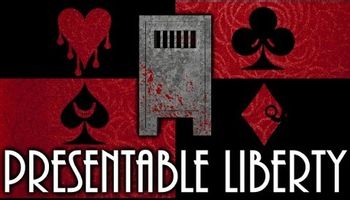 You are worth every penny.
Presentable Liberty is an indie horror game. You play as an unnamed prisoner in a near-empty cell with nothing to do but read the letters a myriad of enigmatic characters slide under your door.
Advertisement:

Even the names of tropes on this page could be considered massive spoilers, so many end-game plot twists are unmarked. Playing the game before reading this page is advised.

An improv driven fandub of the game was completed by the Let's Dub Project.

Remakes of both this game and Exoptable Money were announced

on Kickstarter, but it failed to reach its goal, as did a second

attempt. Sadly, the games will never be remade, as the creator, Robert Brock (aka Wertpol), committed suicide sometime in early 2018.