Literature / It's Such a Beautiful Day 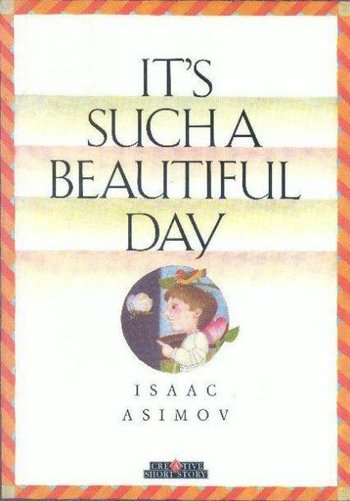 First published in Star Science Fiction Stories no. 3 (1955), by Isaac Asimov, this Science Fiction novelette is about a young boy in a world where a Portal Network joins every building, who has discovered the wonders of the great outdoors.

Taking place in 2117, the Hanshaw family wakes up to a normal 12th of April, with mekkano-provided hospitality, until Richard Jr finds that the Door isn't working; normally he'd punch in the coordinates and be teleported to school, but it isn't working. His mother, Mrs Hanshaw, tells him to go out the normal door and ask a neighbor to use their Door to teleport to school.

After that day, Richard Hanshaw wakes up early each morning to get to school on-time by travelling overland instead of using the Door. This unusual behaviour disturbs Mrs Hanshaw, and she tries to find a solution that won't cause a social scandal. However, Richard is determined to travel overland instead of via teleportation, so Mrs Hanshaw gives up and calls The Shrink, expecting to have her child Mind Probed.

However, just by chance, the psychiatrist she hired hates the psychic probe, and instead asks her a few questions and schedules a session with Richard where he merely talks with the boy, and invites him on a trip outside. He quickly learns why the boy goes outside as often as he can; he's enjoying the adventure of the great outdoors.

It's Such a Beautiful Day contains examples of: