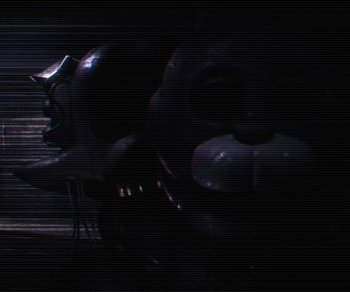 Are you ready to break into Freddy's?
Advertisement:

It's the middle of the night as Thomas' phone calls, waking him up. It's his friend, Chris, and he wants Thomas to accompany him and his two buddies, Richard and Ashley, to a long-closed restaurant they used to hang out at. The reason? Chris suspects there was something sinister behind the place's closure twenty six years prior, and seeks to break in under the cover of night and find some evidence. Thomas begrudgingly goes along with the plan, but as he and his companions explore the half-rotten restaurant, the others begin to disappear, until Thomas is left all alone... or is he?

Oh, and the restaurant's name? Fredbear and Friends Pizzeria.

Yes, indeed, Fredbear and Friends: Reboot is yet another Five Nights at Freddy's fan game, with the series' original animatronics to boot. In contrast with many other fan games, Fredbear and Friends lets you explore the restaurant freely and has animated cutscenes, voice acting and all. A sequel, titled Fredbear and Friends: A Twisted Awakening, has also been released, and both games can be found on the Game Jolt page of their developer, Rarithlynx

Fredbear and Friends provides examples of: