Sealed Badass in a Can 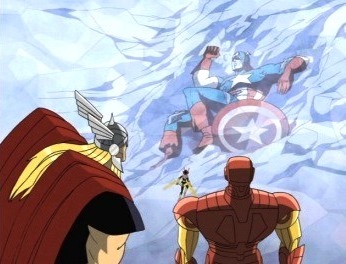 "There's one solution to that problem. Go to Boot Hill and wake the Saint of Killers."
— Preacher

A badass who, as the trope's title suggests, is locked and sealed away from the world, indefinitely (or at least until such a time when their abilities become needed).

This can happen for a variety of reasons: Maybe the Badass's society is peaceful and doesn't need a killing machine (or a Boisterous Bruiser) around between missions. Sometimes it is voluntary imprisonment, if the Badass knows his powers are too dangerous for the world at large; other times the Badass has no choice in the matter, and is merely stuffed away until his or her handlers decide it's time to let him out again. Sometimes they're just in the can so they'll keep; the future needs them young and fit.

Sealed Evil in a Duel is a special case, where the Badass's imprisonment is a Heroic Sacrifice used to personally ensure that the Sealed Evil in a Can remains sealed in its can; alternately, the defeated Eldritch Abomination could have declared he's taking the badass with him.

In any case, when the time is right, this character adds whole new meaning to the phrase "opening up a can of whoopass."

A neutral variant of Sealed Evil in a Can and Sealed Good in a Can. If female, it's often a Girl in a Box. If the badass is mythical and authoritative, its the King in the Mountain. Occasionally involves a Human Popsicle or Superpowered Alter Ego. If (that is to say, "when") the can in question gets opened, it may be a textbook example of Awakening the Sleeping Giant.