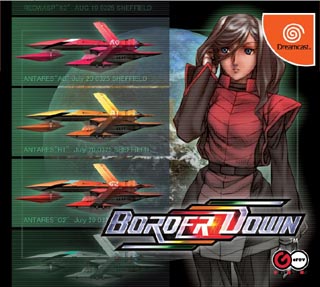 Border Down is a horizontally scrolling Shoot 'Em Up arcade game released by G.rev in 2003, and then later ported to the Sega Dreamcast in Japan.
Advertisement:

In the future, humans have colonized Mars for three centuries and are near completion of its terra-formation. Other than political friction with Earth, it is considered humanity's Golden Age. One day, contact with the Vesta asteroid mine was lost. The asteroid had been taken over by a hostile alien force that would be become known as "First Approach" (F.A). The F.A began causing terrible destruction and then suddenly vanish before anything can be done to stop them. In order to combat this threat, the Solar system Defense Force (SDF) was established. However, irregular electromagnetic waves from The Seed, F.A's power source, will cause the SDF's unmanned fighters to malfunction. In response, the SDF adapted the Remote Artificial Intelligence Network to allow remote control of their newly developed space fighter, Antares.

The first three levels are virtual combat simulations to let Frank Boyd, the pilot, get acclimated to using the RAIN system to pilot three Antares fighters at the same time. Frank's training is interrupted by an F.A, codenamed "Isis," hijacking the battleship Osiris inside a colony. This turns out to be a diversion to allow the F.A time to take over the Ziggurat Space Elevator, topple it, and destroy the Martian capital of Sheffield. Frank assumes control of three fighters left at the city and disables the core of the elevator. Then, things get worse.

This game is known for the "Border System" and its unique scoring method.

Tropes used in Border Down: