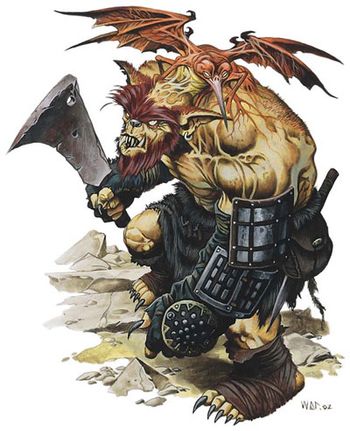 A "Bugsucker" is a symbiotic creature, combining Bugbear (host) with Stirge (guest)
"Of all the parasites I've had over the years, these worms are among the — hell, they are the best!"
— Fry, Futurama
Advertisement:

In biology, a symbiote (or symbiont) is a living organism that lives in symbiosis with another organism. Symbiosis literally means "living together," and it comes in three variations:

In fiction, all types are very frequent guests in Science Fiction and Fantasy. The Heroic Host specifically gets their powers from such an arrangement, though the specifics vary.

Compare Puppeteer Parasite (parasites that control other organism's brains) and Face Full of Alien Wing-Wong (parasites who use our bodies for reproduction), which could be subtropes of this. Also compare Chest Burster. See also Heart Drive for a similar phenomenon involving biological Soul Jars.

For details on hosts for symbiotes, see Body and Host.

Symbiotic Possession and Translator Microbes are versions of Mutualism that are particularly common in Speculative Fiction.

When The Symbiote covers the host's body as some sort of costume, whether for good or bad, it's almost invariably a Clingy Costume.