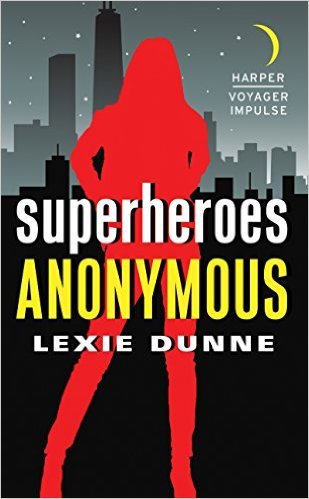 Superheroes Anonymous is a 2014 superhero novel by Lexie Dunne. Gail Godwin is the administrative coordinator of Mirror Reality, the woman behind the scenes ensuring that all of the work actually gets done. Unfortunately, she's also known as Hostage Girl, designated target of any supervillain looking to make a name for themselves by kidnapping and threatening her.

She has her own personal superhero, Blaze, who rescues her every time, but it's far from an ideal situation as she's frequently in the hospital recovering from the kidnappings, and she can't afford to leave the job she hates because they provide excellent medical insurance. One day, her boyfriend of several years (definitely not Blaze despite superficial resemblances) and Blaze suddenly move to Miami, leaving Gail to try to make a life of her own without being kidnapped every week. Unfortunately, not every villain has gotten the memo that Hostage Girl is no longer being saved, and one villain's attempt to addict Gail to a radioactive substance turns out to have unexpected consequences.

Superheroes Anonymous was followed in 2015 by Supervillains Anyonmous, wherein Gail learns that her kidnapping may not have been random, that the jail for supervillains is surprisingly comfortable, and that there are sinister conspiracies underneath the surface of the superhero community. In the third novel of the series she learns How To Save The World. And in the fourth (and final) novel she embarrasses herself and her mentor with #HEROFAIL.