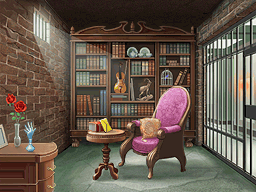 A suite to kill for.
"Odds bodkins! This convict penitentiary is really nice! If I ever get arrested, I'll demand to be sent here!"
— Charles Upstuck III, DuckTales (1987)
Advertisement:

A big-time crook gets sent away to prison, but the forces of law and order can't sever all their outside connections. The character in question has the wherewithal to bribe the guards, walk freely through the prison, have their plumbing and bedsheets upgraded, eat caviar in their cell instead of baked beans in the lunchroom, etc. Sometimes, the prisoner may actually have all the resources necessary to escape, staying "imprisoned" because there's a particular reason to do so, or because they can run their affairs perfectly unhindered from right where they are. Or it might be because they actually do something that benefits the authorities. Usually occurs with rich crooks; they'll do anything to retain as much as they can of their former big-spending lifestyle.

This is actually Truth in Television; notorious felons like Al Capone, Adolf Hitler, Pol Pot, Pablo Escobar, and Augusto Pinochet were kept under house arrest or housed in very, very nice prison cells (at least until Capone got transferred to Alcatraz). This also happens in cases where the prison is designed to rehabilitate the prisoner into Heel Realization and keep them away from normal people rather than simply punish them, in a forcible aversion of Had to Come to Prison to Be a Crook.

Compare the Gilded Cage, where an innocent is deliberately confined in an abode luxurious enough not to look like a prison. Contrast the Hellhole Prison, where the environment in the prison is cruel and horrible.

Varrick ends up in one, after his scheme to kidnap the president falls through, having built the prison and had a cell made especially for him, knowing he would end up in one someday.

Varrick ends up in one, after his scheme to kidnap the president falls through, having built the prison and had a cell made especially for him, knowing he would end up in one someday.