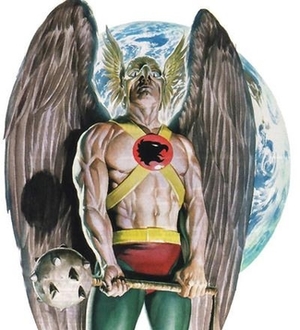 Chest insignias are obligatory. Shirts are optional.
Lois Lane: What's the "S" stand for?
Superman: It's not an S. On my world it means "hope".
Lois: Well, here it's an S.
— Man of Steel
Advertisement:

The universal formula for depicting a character to be instantly recognizable as "a Superhero" of some sort: put them in reasonably form-fitting clothes, and then add a prominent symbol on the chest.

Almost universally in the earlier eras, and in many cases today, the logo is centered and covers at least half the space available; a variant, that appears more and more frequently nowadays, has it shrunk down and off-center like a police badge, or on a belt buckle. Symbols on back, shoulders, or even forehead are less common, but still viable. Symbols on the legs or feet are extremely rare and usually only on characters with costumes too skimpy to fit them anywhere else. Copyright-holders soon realized that these insignia were marketing gold, in that fans of the characters were more consistently attracted to the insignia than the faces of the characters themselves; a valuable realization when different performers were chosen to portray the characters for various reasons. In addition, it's often easier to slap a stylized letter or icon onto merchandise, since the Uncanny Valley comes into play when trying to incorporate character faces onto merchandise. The rare occasions where character faces are used as insignias almost always involve masked or clearly inhuman characters. Even then, the insignia tends to be heavily stylized and simplified representation of the face/mask or a silhouette with only their most identifiable features or accessories depicted.

Recently there has been a trend (particularly with less "super" characters) of justifying the symbol by having it attract gunfire towards the torso (which is easier to armour), such as with Batman and The Punisher.

Said symbol will often be Brought to You by the Letter "S". If it glows, there's overlap with Heart Light.