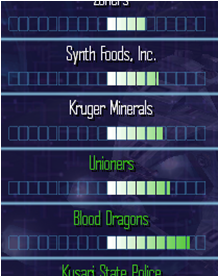 The Corsairs hate you, though.
The act of deciding which of various dueling factions you want to have as your enemies and allies, and the effect your actions have on that balance.
Advertisement:

For instance, imagine you take a mission from Faction A to kill ships belonging to Faction B. This pleases Faction A and the allied Faction C, while angering B and their allies in Faction D. Depending on your current and desired relations with Factions A, B, C and D, this may work out to be either good or bad for you.

The simplest form of this is the Karma Meter, in games with light- and dark-side factions. Story-based alliance changes don't count; it has to revolve around actions you might or might not choose to take. You may be able to become friendly with most of the factions present, but you can't please everyone. There may even be a faction you can never become friendly with, no matter what.

It may determine different Faction-Specific Endings. Compare Relationship Values for individuals, and Karma Meter for when there are only two sides. Factions that love you may give you a 100% Heroism Rating, while if you make everyone hate you, You Lose at Zero Trust. See also With Us or Against Us and Enemy Mine.

Examples of the Alliance Meter in popular media: