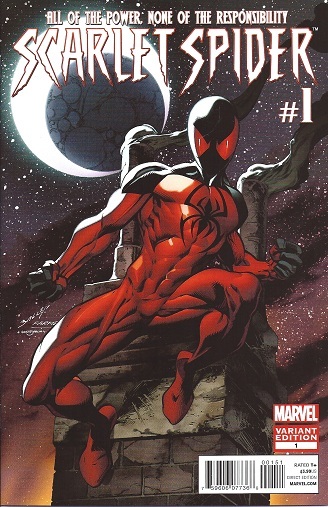 All of the power. None of the responsibility.
The second volume of Scarlet Spider stars Peter Parker's first genetic clone, Kaine as the titular hero. After helping to stop Spider-Island, Kaine has been cured of his clonal degeneration. While fleeing to Mexico he stops in Houston to steal money from criminals, but ends up becoming the superhero, Scarlet Spider.
Advertisement:

The series introduces several new characters in the Marvel Universe, such as Aracely Penalba (the demigod superhero known as Hummingbird), and Annabelle as a love interest for Kaine. They play pivotal roles in the growth of Kaine as a superhero.

The series is written by Christopher Yost. While this title was cancelled at Issue #25, Kaine makes appearance as one of the main characters for Marvel NOW! reboot of New Warriors, also written by Yost.