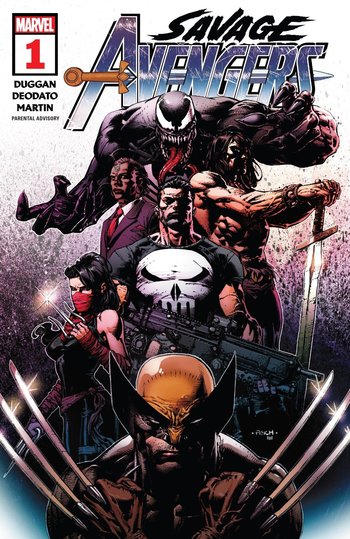 Savage Avengers is a comic book series launched in April 2019 as part of the Marvel: A Fresh Start initiative, written by Gerry Duggan with Mike Deodato Jr. on art.

After finding himself transported to the modern day, Conan the Barbarian finds himself allied with a ragtag band of... very violent people, who unite to stop the sorcerer Kulan Gath. The team consists of:

The team is darker and more prone to violence and killing than other Avengers teams, and is marketed as such. The series sees Conan regularly interacting with the wider Marvel Universe since Marvel regained his publishing rights in January, 2019 and the Avengers: No Road Home miniseries.

For a similar title released oddly close to this one, see Strikeforce.