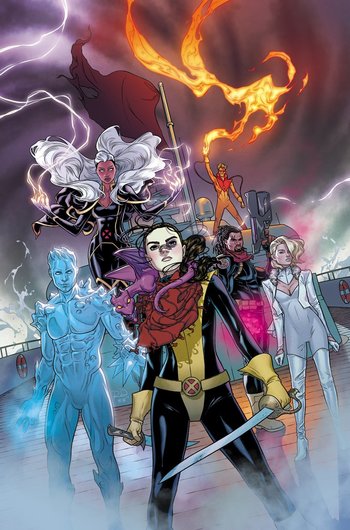 "If you're a mutant and you can't get to Krakoa...then the Marauders will bring you home!"
— Captain Kate Pryde, Marauders #1
Advertisement:

Marauders is a 2019 comic book series, focused on the titular team (not to be confused with Mr. Sinister's team). It is part of the Dawn of X relaunch, and is written by Gerry Duggan and drawn by Matteo Lolli, who had previously worked together on Deadpool.

Notably, this series is of a genre that's never been covered by X-Men before: Pirates. The merry band of Marauders, led by Captain Kate Pryde joined by Storm, Iceman, Bishop and Pyro (and their Team Pet Lockheed), who set sail in the open seas to protect those hated and feared! But every seaborne venture needs a patron, and the Marauders' mission soon becomes entangled with the political battle between Emma Frost and Sebastian Shaw over control of the Hellfire Trading Company.

The series ended in January 2022, replaced by a second series, written by Steve Orlando as part of the wider Destiny of X relaunch.