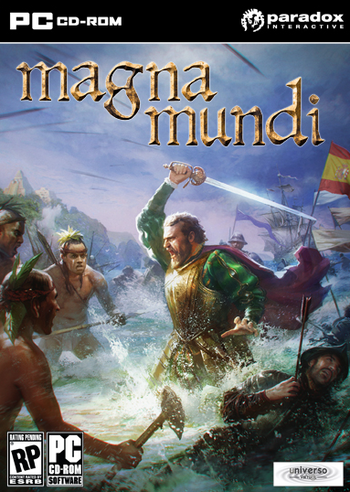 The cover of the official remake that never was.

Our objective is to give you, the man behind the curtain, the tools to pursue your objectives with myriads of different strategies and immerse you in a new reality. Your challenge is to take the best decisions and decades, if not centuries later, look back and be proud of the decisions that shaped your nation's destiny.
— Ubik, creator of Magna Mundi

Magna Mundi is a mod for Europa Univeralis III. It was meant to become a game of its own in 2012, but that was cancelled. It has been known to be a challenging mod, as it prevents easy expansion where it would not be historical.

It improved and expanded on EU3, with more advanced religious conversions and religious minorities, a revamped naval system, internal factions, an in-depth Holy Roman Empire, Barbary Pirates, an advanced building system, a gorgeous new map, and much, much more.

The mod itself is no longer being produced after the newest Europa Univeralis III expansion, "Divine Wind", in favor of the commercial game. The commercial game was cancelled by publisher Paradox Interactive in June 2012.

This game mod (and future stand-alone game) provides examples of the following tropes: