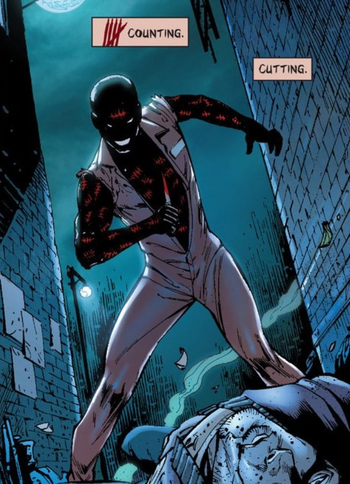 "617: The forehead is not an appropriate place for a kill-count holo-tattoo."
— Things Mr. Welch Is No Longer Allowed to Do in an RPG
Advertisement:

This trope is common in media where there is someone who feels the need to keep track of multiple kills and show their teammates/the world how skilled they are.

Pilots in war films usually slap a custom decal on the nose of their plane to denote how many enemies they've taken down. It's not just a boost to the pilot's ego, but a morale boost to the entire squad and a demoralizer to the enemies.

Serial killers also keep a kill tally as a Creepy Souvenir. Some even do the tally on their own bodies making themselves a Human Notepad.

In Lighter and Softer works, the tally may mark down victories at a sport or challenge. They will also use paint, stencils, markers, or rubber stamps to mark their tally rather than something visceral.

If you have two or more people doing this to compete at who's the best at taking down enemies, that's Body-Count Competition, which may or may not come with a physical kill tally. If the medium itself is keeping track of dead bodies rather than the characters themselves, that's separate from this trope.

This trope occurs commonly in many World War II movies, since the practice was common for the actual soldiers in battle.