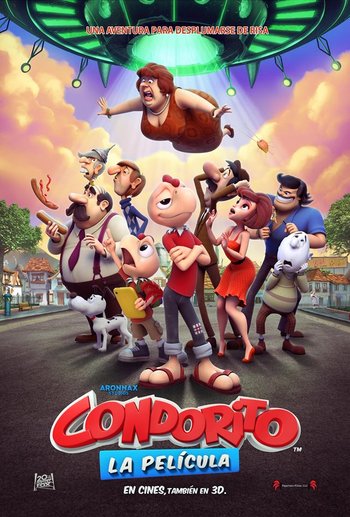 An adventure to pluck laughing.
Advertisement:

Condorito is a very famous Chilean (as well Latin American) comic book character that has not just fans in Chile, also in other countries like Peru and Mexico. This fame was augmented when a 2D animation was made in The '80s as a section of Sábados Gigantes, usually short animations of 1 minute in Mime and Music-Only Cartoon and developed by Canal 13 TV (Chile) and RTVE (Spain.) Decades later, a second series was made in 1997 under Reanimados Estudios and Televisa.

Then decades later... The Movie arrived. As a preparation, in 2016 were made various CGI animated shorts in which Condorito finally has a voice, then Condorito: The Movie was made and released in 2017 as a co-production between Chile and Mexico and distributed by 20th Century Fox, having various famous Voice Actors and even releasing an international English version (with the name of Space Chicken), which gives Condorito a new renowned fame between Latin American people as well in United States and other places around the world.

In 2019, Cartoon Network created a Spin-Off Babies short animated series called "Condorito Jr." with kids version of all adult characters as a kind of prequel. Apart of the short episodes, in the Latin American website they have digital comics with their characters.

The trailer for the movie is here

, even having its own entry

in IMDb. For The '80s cartoon, the original ones can be seen here

, and the remastered ones here